Goalkeepers will always be controlled by AI.

The teams will be formed by the number of players that each captain considers appropriate. In each match it will be possible to play with a maximum of 10 players and will be obligatory to play with a minimum of 8 players to start an official match.

In case of playing with less than 10 players, the surplus can be assumed by the AI ​​or by some or some players that lead to ‘anyone’.

The rooms will be created with matches of 15 minutes, difficulty legend (for goalies), Goalkeeper NO, Player Legend NO, Any YES , Injuries YES

During the tournament period will be played one fixture per week. Each fixture will consist of two consecutive matches, so in each fixture both teams will fight for 6 possible points

The fixtures of the tournament will be played on the day and time agreed between the captains of the two teams. Officially the bands to play matches will be included between Sunday night and Friday night, leaving free weekends. However, if the two captains agreed, a fixture could be arranged to dispute it at the weekend with full validity
Regardless of the local team, the room will ALWAYS be created by the player with the best connection to try to avoid the possible lag.
In case of being a player of the visiting team, the local team will locate in the left side for choosing stadium and pitch conditions.

Participating teams must choose between clubs of 4 stars or less, being able to repeat a club. The election of the club will be referred to the organizer privately, and if a club election is repeated, the teams involved will play the club in a KO round.
The winning team of the KO round will keep the club in dispute, while the losing team will have to choose another club once discarded all the clubs assigned already to a team..
If among the potential losers of the different club elections, election was repeated, the same system would be applied until all had a club assigned
. 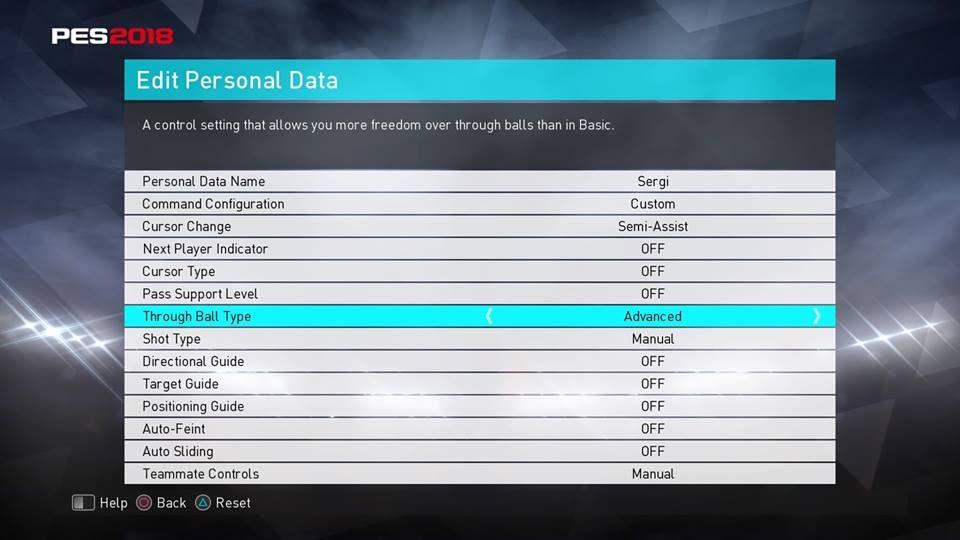 The tournament will be played with full manual controls, leaving the Through Ball Type at the player’s choice. So that the controls can be set with any of these two configurations.

There will be 2 divisions with 9 teams each, plus the Cup with all 18 teams.

The 11vs11 manual community has some teams with strong infrastructures behind them, such as web pages, forums or YouTube channels with a large number of visits.
There are players of some teams with youtube channels where the visits of the live broadcasts of the 11vs11 matches duly promoted are counted by hundreds. For this reason, each participating team must provide a first and second kit so that users who are going to broadcast the matches place them in the rival’s club as well as in their own.

To create the kits you can use the Creator Kit from the pesmaster.com page
All the kits must implement the patch of the competition on the sleeve, which you will find in the Dropbox with the name of LOGO LIGA PES.png

Kits should be placed in the KITS folder, with these:
-nameofteam_home.png
-nameofteam_away.png

The access data to that Dropbox will be communicated shortly to the captains of the teams by private message.

For this first tournament, the kits will be placed as third and fourth kit (if it’s possible due to licensing issues) in the chosen clubs, so it is not necessary to create a secondary account in PS4 to place the new kits.

For teams with less than 10 players, substitutions are not available. Because Konami is now allowing to substitute real players (new feature), both captains can agree on it. Agreement has to be before the game, if there is no agreement, teams cant use the subs.

Captains should send agreement to Admin team before the game, and during the game if another team is violating them. Admins are always available on whatsapp chat during the official games.

If the game is interrupted in the first half, with result of 0-0, you should repeat the whole game. In any other cases you continue from the minute it was interrupted.

1.1 all participants in FUMA tournaments must treat each other and the organization respectfully.

1.2 When a participant has hurtful, offensive or racist expressions towards his/her opponent, he will be immediately be disqualified and disciplinary measures will be taken.

1.3 Bad language and/or threats against the PES FUMA Admin means an instant disqualification.

1.4 In cases of fraud and/or cheats, a participant will be disqualified immediately and disciplinary measures will be taken.

1.5 All participants are treated the same way by the PES FM Admin. When breaking the rules, the following disciplinary measures will be taken.

2.1 If you have any questions and/or problems, you can contact a PES FM Admin at all times.

2.2 The participants need to treat the PES FM crew respectfully.

2.3 The PES FM crew need to treat the participants respectfully.

2.4 The PES FM Admin eventually has the right to make decisions when exceptional situations occur.

Prizes for season 2 will get the Serie A and PES FM SUPER CUP Winners.

Prizes will be sent to players that have at least 14 games for their team. It will include all, PES FM League, PES FM Cup and PES FM Supercup.